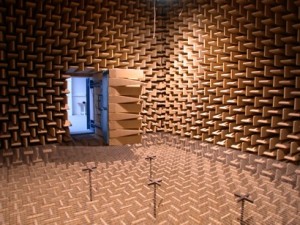 Accurate measurements are fundamental for all research and development work of the Acoustic group, and its members have taken the part in development of a number of measurement methods and their applications. In 2002, new anechoic room was put into operation, then the largest facility of this type in Czech Republic. this space enables precise measurements in frequency range from 70 Hz, and is constructed as a house within a house to attain the necessary low background noise level, which is immeasurable starting approximately from 200 Hz. The anechoic room is used not only for research and teaching but also for design and testing of commercial applications.

Starting in 1995, acoustic research has partially focused on active methods in acoustics based on the appropriate interference between the primary wave and a secondary (control) wave. The first experiments were realized for a one-dimensional sound field (wave guide) and later were extended to noise control in ducts with higher-order modes of sound propagation. Methods for creation of zones of quiet around a human head have also been studied and realized. At present, the research is mainly focused on active control of vibration and active control of sound radiation from vibrating bodies.

Starting in 1997, members of the Acoustic Group have been involved with sound quality evaluation methods. This currently very popular branch of acoustics is derived from psychoacoustic research from the 1950s. The first studies in our laboratory were realized in collaboration with the Czech appliance manufacturer ETA, a.s. on sound characteristics of vacuum cleaners in late 1990s. Current research is focused on objective methods of evaluation of sound quality of everyday products (computers, hair dryers, shavers, etc.), obviously accompanied by many subjective tests. Subjective listening test are also used within architectural acoustics research (e.g. intelligibility tests).

Methods of sound field modeling and mapping have been of vital interest for the Acoustic Group for last 15 years. Primarily it is necessary to mention acoustic holography, which enables to reconstruct three-dimensional sound field from measurement of sound pressure or particle velocity on the measurement surface. The sound source localization method based on beamforming algorithm is also used as diagnostic tool in noise control tasks.