We are a group at the department of physics, working in the field of basic research of hot and dense plasma, especially focusing on the high-current lightning-like discharges.

We participate in the education of the students, mostly in the PhD study program Plasma physics (at FEE CTU) and in the advanced part of the masters course at FNSPE CTU in Prague (course Physics and technique of thermonuclear fusion).

We will gladly welcome another member of the team in any position, for example: PhD student, scientific worker, under-graduate student making bachelor or masters thesis… The main condition is not excellent knowledge, but enthusiasm, be it in electronics, measurement, numerical simulations etc. (our work is not only about physics).

High-current lightning-like discharges, the so-called Z-pinches, are presently the most efficient (>15 %) and most powerful (500 000 GW, 2 MJ) laboratory sources of the X-ray radiation. In the recent years there was also a surprising discovery, that in the imploding Z-pinches, the ion temperature can be higher than 200 keV, which is 2×109 K, which represents the highest ion temperature measured in a laboratory.

We specialize in diagnostic of various kinds of radiation (visible, soft and hard X-ray), electrons, ions and neutrons and in diagnostic of electrical variables. Further we describe the processes, which occur in the dense magnetized plasma.

In the plasma created by big lasers or Z-pinch discharges also fusion reactions can occur. Study of the neutrons originating from D(d,n)3He fusion reaction is carried out by the team members in the Laboratory of high-current discharges at FEE and mainly abroad, cooperating with the teams in the Russian federation and Poland.

What is it good for?

Our experimental results have wide possibility of usage in the following fields of study:

A part and a great advantage of our research are the possibilities of education and direct students contributions to the experiments. Thanks to the individual approach of the experienced members of the team and thanks to the hardworking students, enthusiastic for the subject, quality student works are produced.

What are we working on?

The home work-site for our research is the laboratory of high-current discharges at Department of physics at FEE CTU in Prague. Here we have a relatively small device PFZ-200. It is a small modified plasma focus. In its inner chamber we can produce a plasma column with 200  250 kA of current. The device PFZ-200 is used for: (i) Preparation and testing of the dense plasma diagnostics, which is then used for another, much bigger devices abroad. (ii) Basic research, where we study the means of accelerating the ions in the dense plasma and production of the fusion neutrons. For illustration we show the next picture, where time-evolution of the pinch discharge is shown. The pictures were made with a pin-hole camera with a MCP detector with 5 nanoseconds of exposition time. (iii) For teaching purposes in the bachelor, master and PhD study courses.

During the discharges in the device PFZ-200, acceleration of ions and electrons to high energies occurs. In these conditions X-ray radiation is generated and more energetic particles can be produced. In the case of using heavy hydrogen (deuterium) as a filling gas, fusion neutrons can be produce as well. That is why the operation of the PFZ-200 device at FEE CTU in Prague must be approved by the State Office for Nuclear Safety. Our device was classified as a simple source of ionizing radiation. It is one of the few university devices in the world, where there is the possibility to produce and measure fusion neutrons.

The plasma focus device PF-1000, located in the Institute of Plasma Physics and Laser Microfusion (IPPLM) in Warsaw represents a powerful source of fusion neutrons on a medium-sized device, with currents up to 2 MA. Plasma generated by this device can be studied by a complex X-ray, neutron, interferometric and probe diagnostic in the frame of International Scientific Committee of Dense Magnetized Plasmas (ICDMP) research. In the last year the research was oriented on the study of the influence of vaporized electrode materials, on the study of the external magnetic field and on the properties of the deuterium plasma imploded by the heavier gas, for example neon.

On the left picture we present a group photo from the year 2009 in IPPLM in the front of the PF-1000 device. On the right picture you can see the visualization of the plasma discharge of the plasma focus type. The time evolution of the electron density is showed, which was reconstructed from 15 interferometry figures. 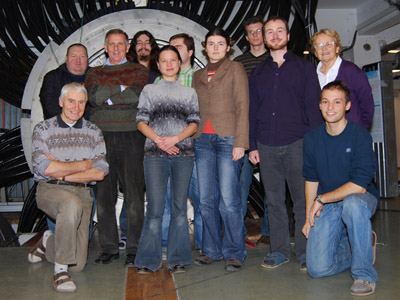 Since 2011 we cooperate with the group of Dr. Alexander Shishlov from Institute of high-current electronics (IHCE) in Tomsk, which is located in a Siberian part of Russian Federation. In this location a special generator of current pulse GIT-12 is placed. It is a terawatt generator, able to produce a current pulse with 5 MA of current and with rise-time to maximum in 250 nanoseconds or 1 microsecond. Few of the most important result lately (year 2013) are the achievement of highest observed energy of neutrons (>20 MeV) and ions (>25 MeV) in Z-pinches and second highest yield from the fusion D(d,n)3He reaction on Z-pinches (4×1012 neutrons in one shot), which means highly effective production of the fusion neutrons with intensity 1020 reactions per second.

For illustration we show on the next picture the neutron time-of-flight signals from the year 2012, which were measured by four detectors in various distances (shown left) and the reconstructed time-evolution of energy spectrum of the fusion neutrons by Monte Carlo methods (right). This neutron diagnostic is one of the most important diagnostic we use and thanks to it we can get greater understanding about the production of the fusion neutrons than other foreign workgroups. On the lower picture you can see time-integrated picture of the Z-pinch discharge, which was obtained with a pin-hole camera with diameter 100 micrometers and beryllium filter with width 25 micrometers. There are two pictures from different discharges from the year 2011 (No. 1408 and No. 1409).

Apart from experiments, which we design, prepare and realize on the devices PFZ-200, PF-1000 and GIT-12, we are also contacted a few times during the year with a request to operate diagnostics on other devices (laser PALS in Prague, experiments in GSI in Darmstadt, in CCHEN in Chile). For illustration we present photographs from the interaction room at the PALS laser in Prague (left) and PHELIX laser in Darmstadt (right). 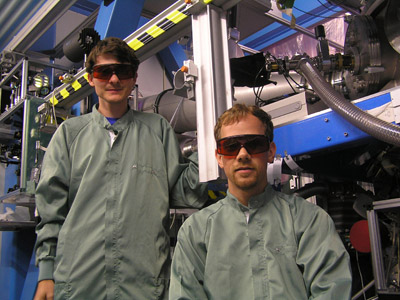 Sponsors of our research

Because big number of our publications and publications of our co-workers, only journal papers from 2012 follows: